Satta Matka is a hugely popular form of gambling and betting in India. It is essentially a lottery, where punters bet on random numbers, hoping to win big.

Lottoland - where you can play Satta Matka online whenever you want!

Lottoland has introduced a new product “Jhatka Matka” that will resonate quite well with the Indian audiences.

The product has been customized for all the “Matka” players, and with its simple and intuitive game play we believe this will make it easier to attract even newer players.

Understanding Matka games and the payouts is extremely simple. Check out our comprehensive guide below for the Jhatka Matka game on Lottoland.

Guide to Jhatka Matka on Lottoland

In a regular game of Satta Matka, the draws taking place have a frequency of 1 hour. Lottoland has reduced this considerably, makeing the draws take place every 10 minutes. Also, you can bet with a bet size as small as ₹10 for every type of bet.

Interestingly, the draws are named after various cities in India. The reason behind this is, in the original version of the game, the winning numbers were based on the rate of cotton as published in the regional newspapers in India. 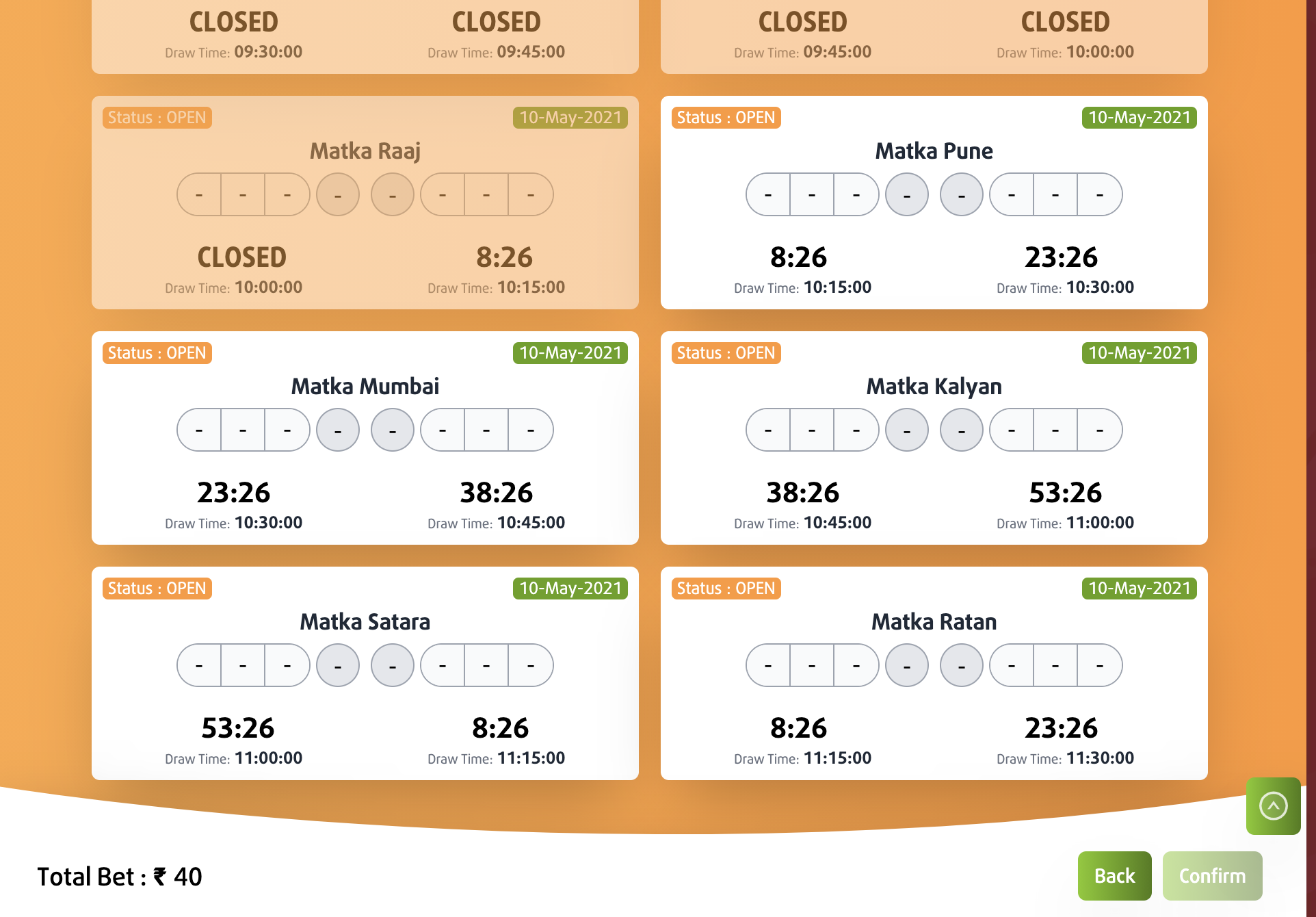 We have all sorts of draws here including:

For every draw, there is an “Open” and a “Close” number.

The draws are every 10 minutes and you can choose the draws in advance.

Jhatka Matka offers 7 different Betlines. We would suggest trying out all of them one at a time to understand the game and then master it. The betlines offered are: 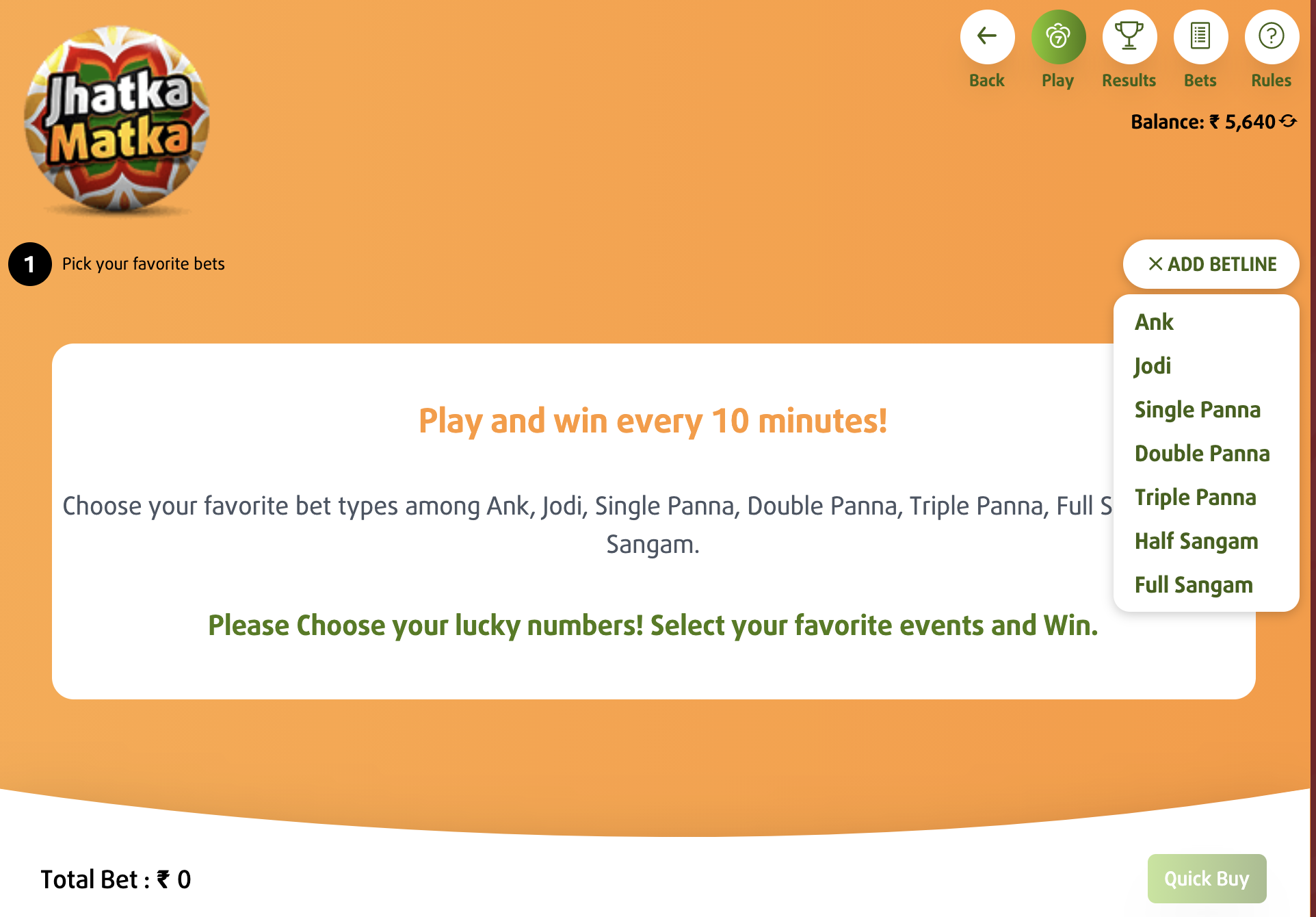 On every draw, there is a set of 3 digit numbers, drawn twice out of the matka randomly.

There is an additional set of numbers drawn in the same fashion which are called as the “Close Panna” or simply “Close” for reference. This is drawn after 15 minutes of taking out open panna.

Now, while writing the numbers of the draw, the Ank for both the numbers are written in center such that:

Additionally, the combined numbers together will become a Jodi. In the example above “15” becomes a Jodi.

This is the simplest form of bet on Matka games with a payout of 1:10. For every ₹10 bet placed, you will get ₹90 as winning. 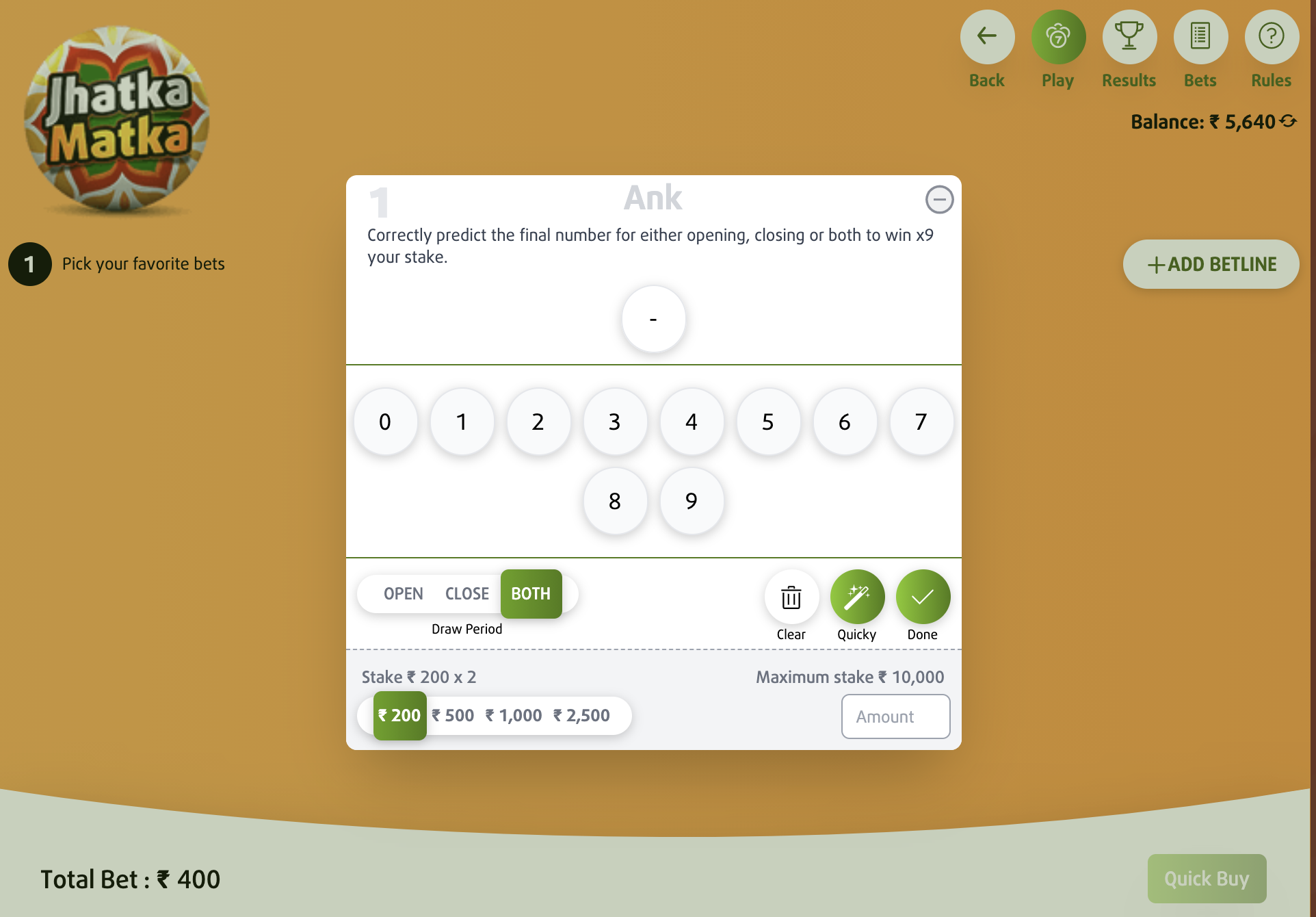 This is a single number selection for either the “Opening” , “Closing” or “Both”. Do note if you select “Both”, since there are 2 bets being placed your Stake will also be multiplied by two. 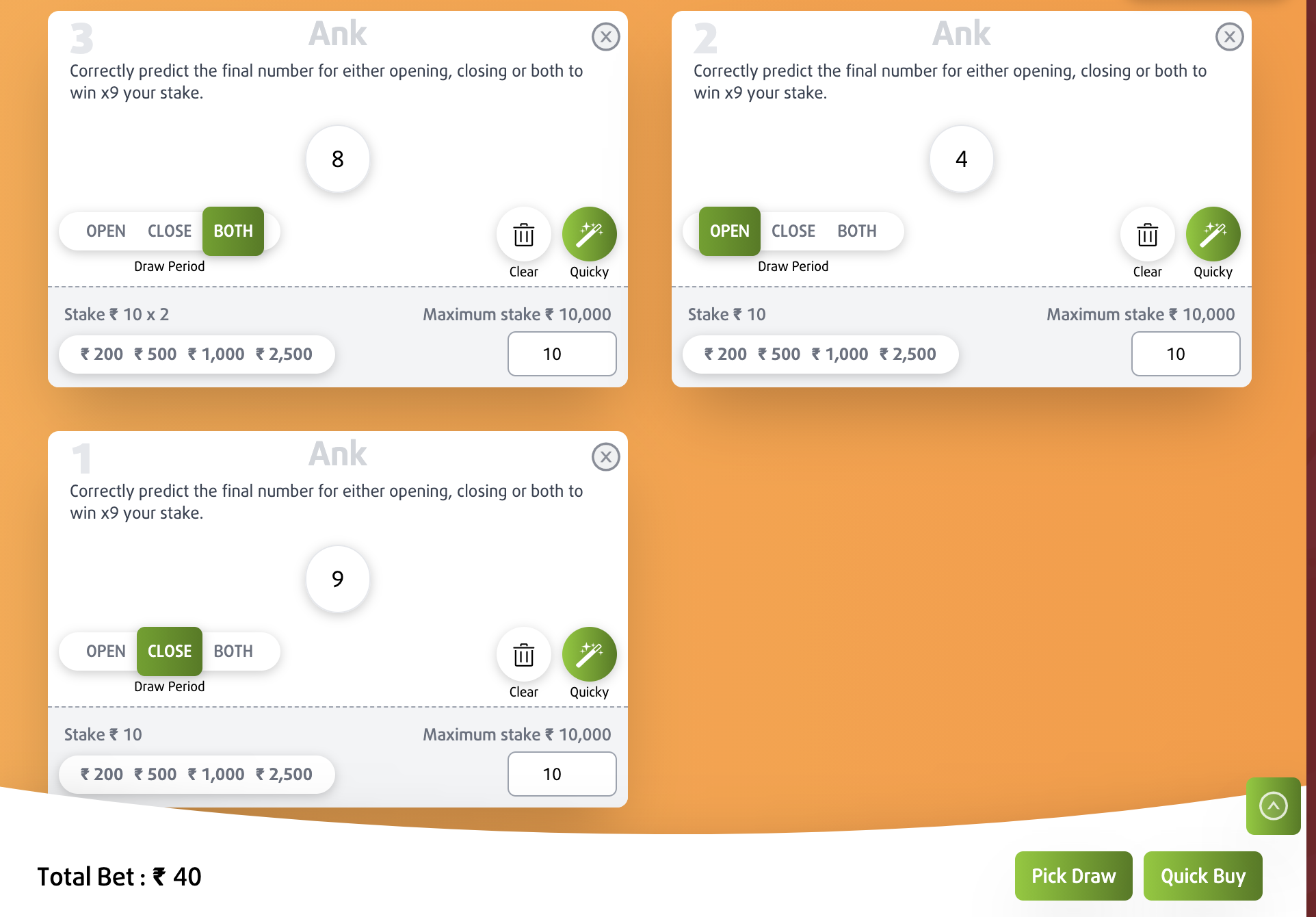 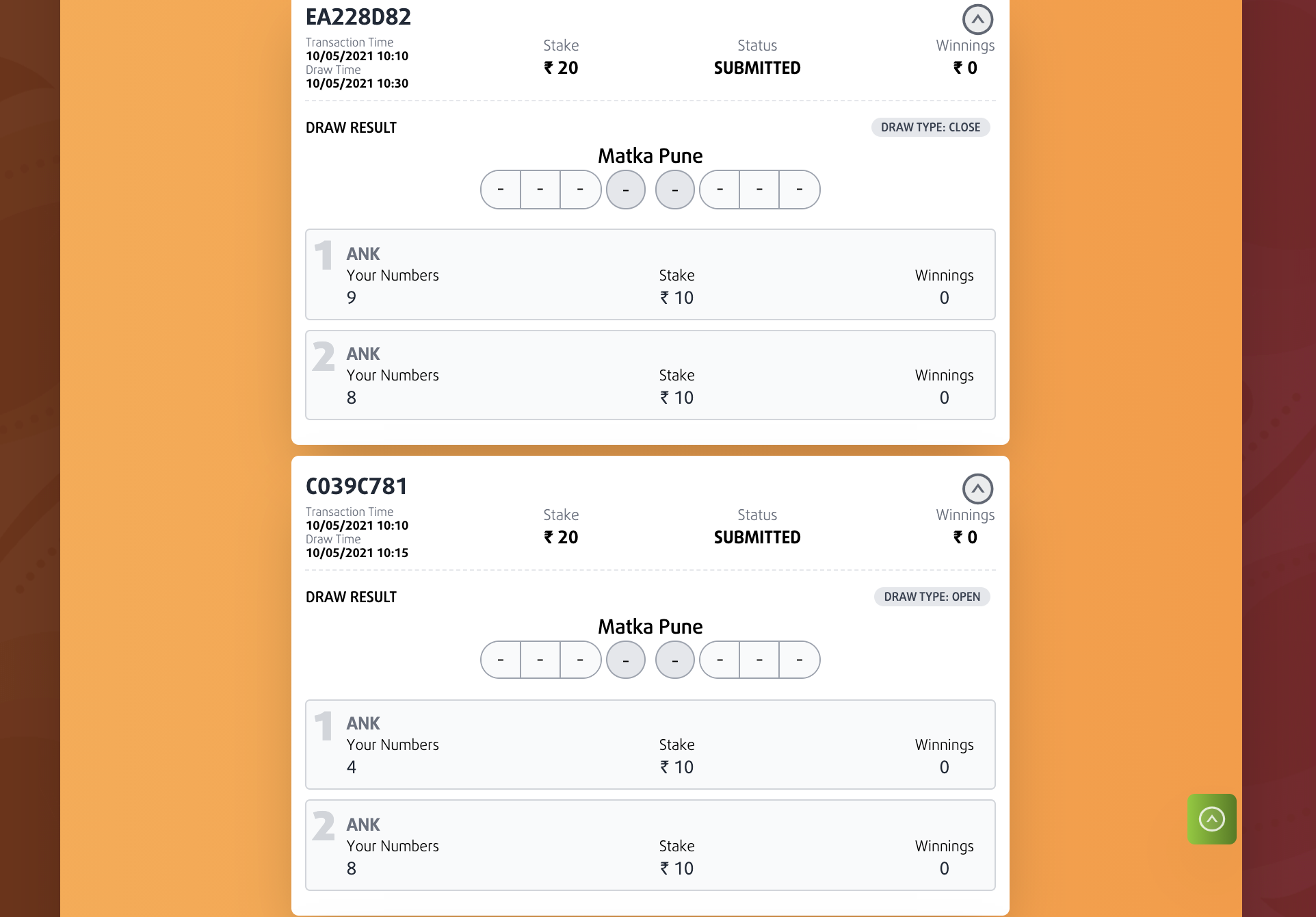 Jodi is the combination of “Ank” derived from the Open Panna and Close Panna (Open or Close). The payout for this is 1:100. The payout gives a 90 times multiple of the original bet. For every ₹10 bet placed, you will get ₹900 as winning.

With that high payout, we generally select more than one jodi for a draw. It can be done by adding multiple betlines on Jodi. 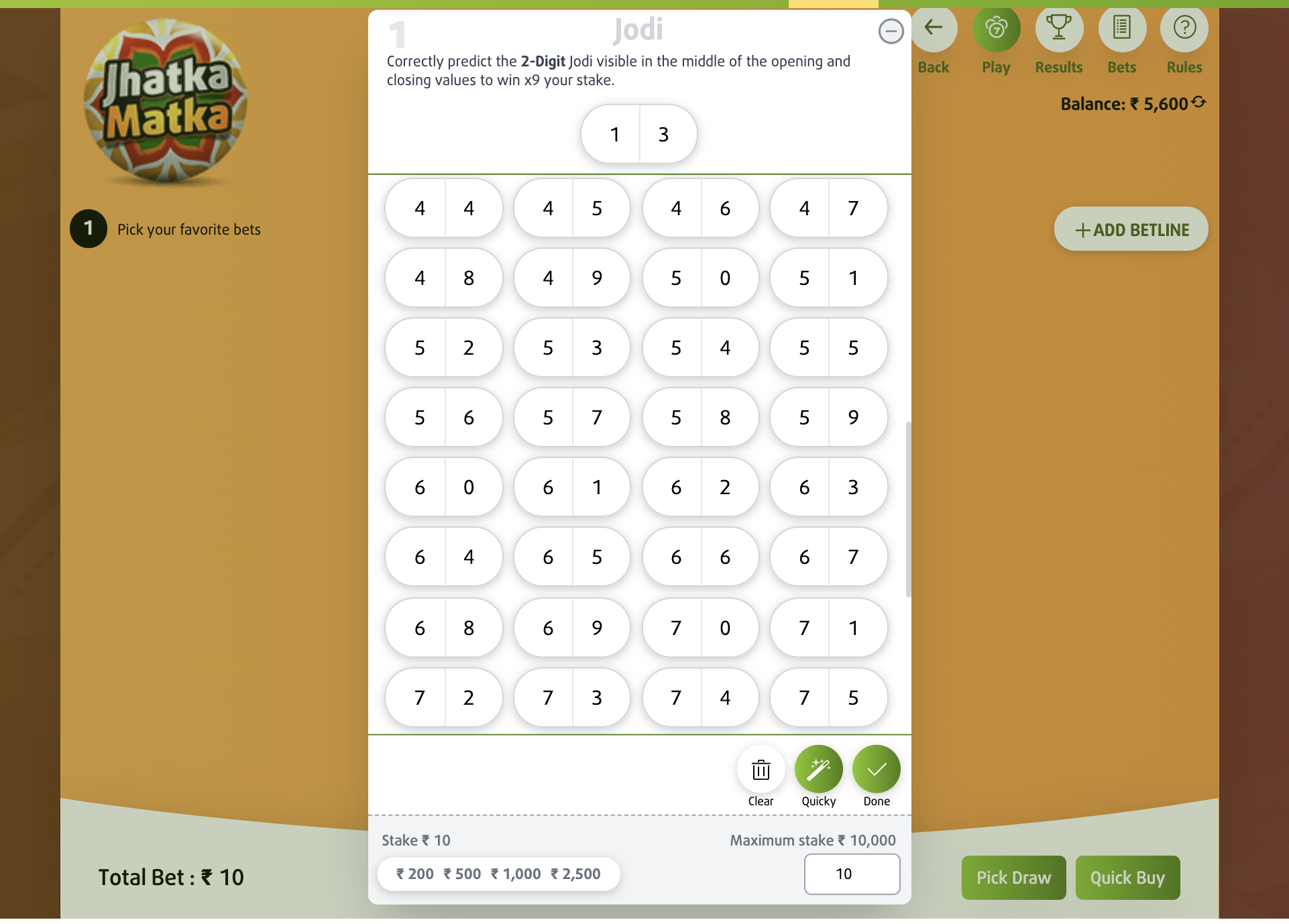 This is again a very popular bet, but is for an advanced level of players (or those who develop a better understanding of the game to know what they are placing a bet on).

Single Panna is a bet placed on either Open or Close for all the numbers being unique. The payout for every ₹10 bet placed is ₹1000! We quite like the Lottoland Matka interface for this, as it provides all the numbers distributed with various Anks, so you can choose your lucky Ank while choosing Single Panna. 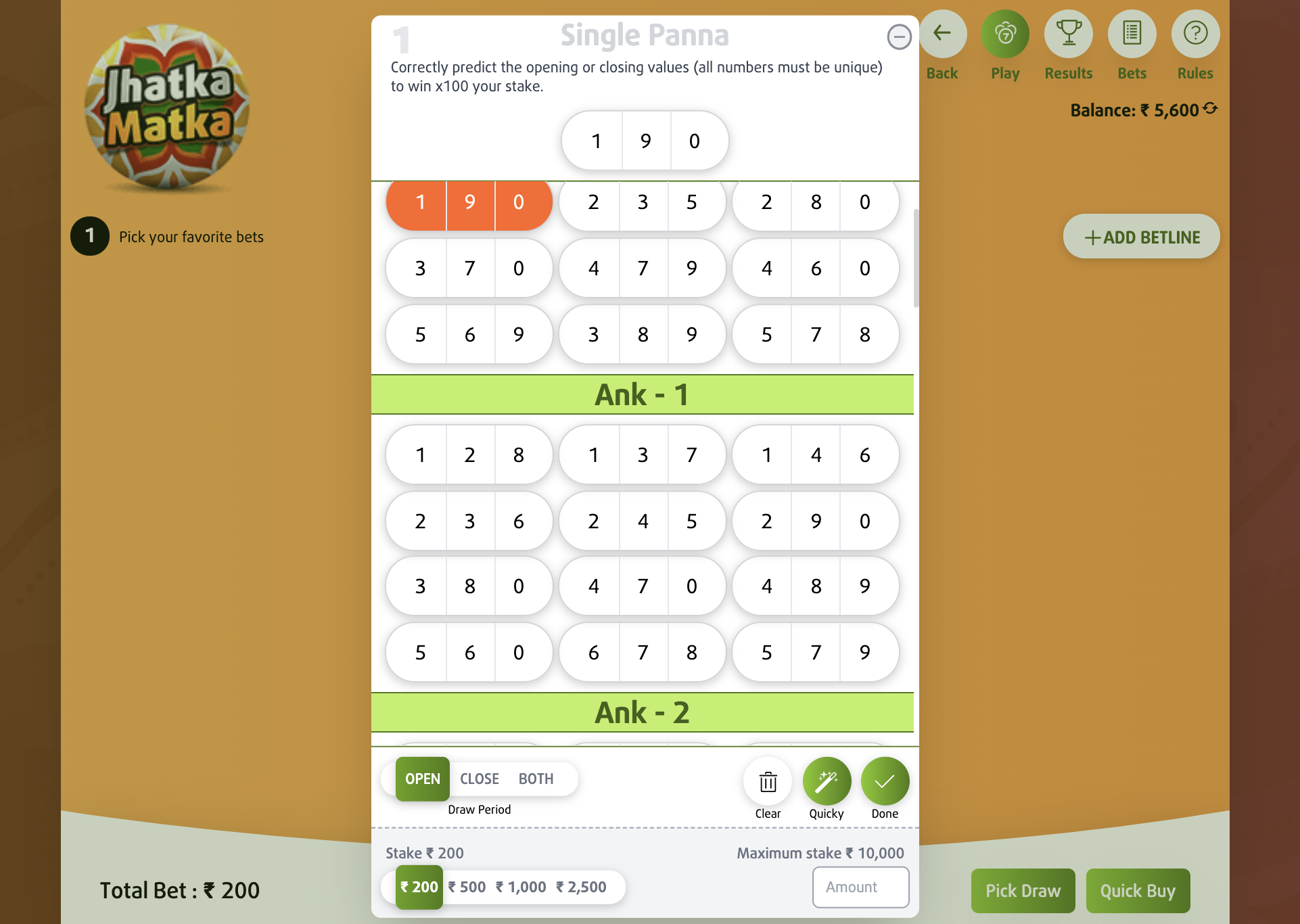 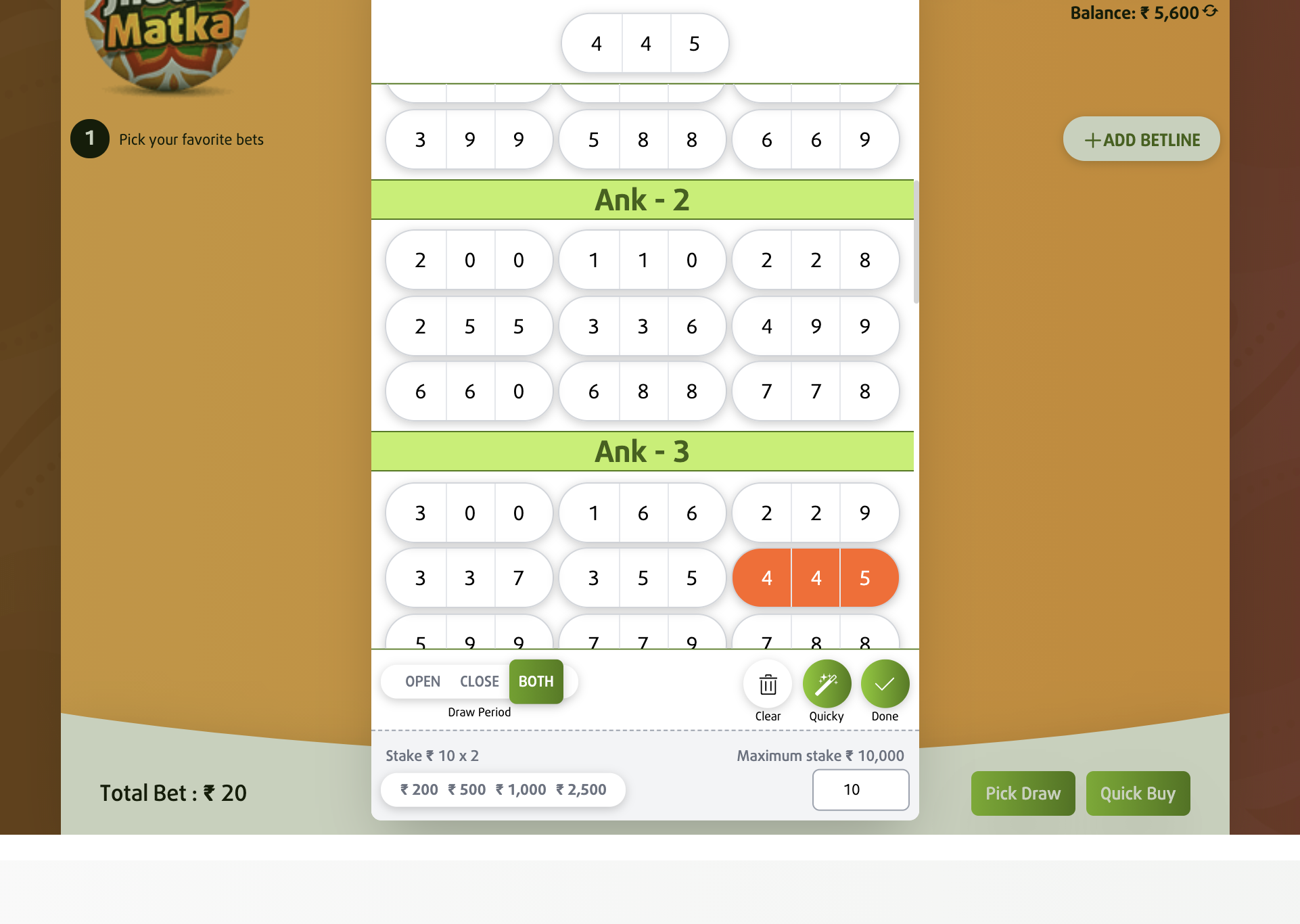 Now, comes one of the heavyweight bets. Triple Panna, as you might have guessed, is placing a bet on the open or close values, with all numbers being the same. The payout for this bet is 3 times that of Double Panna. For every ₹10 bet placed, you stand a chance to win ₹6000 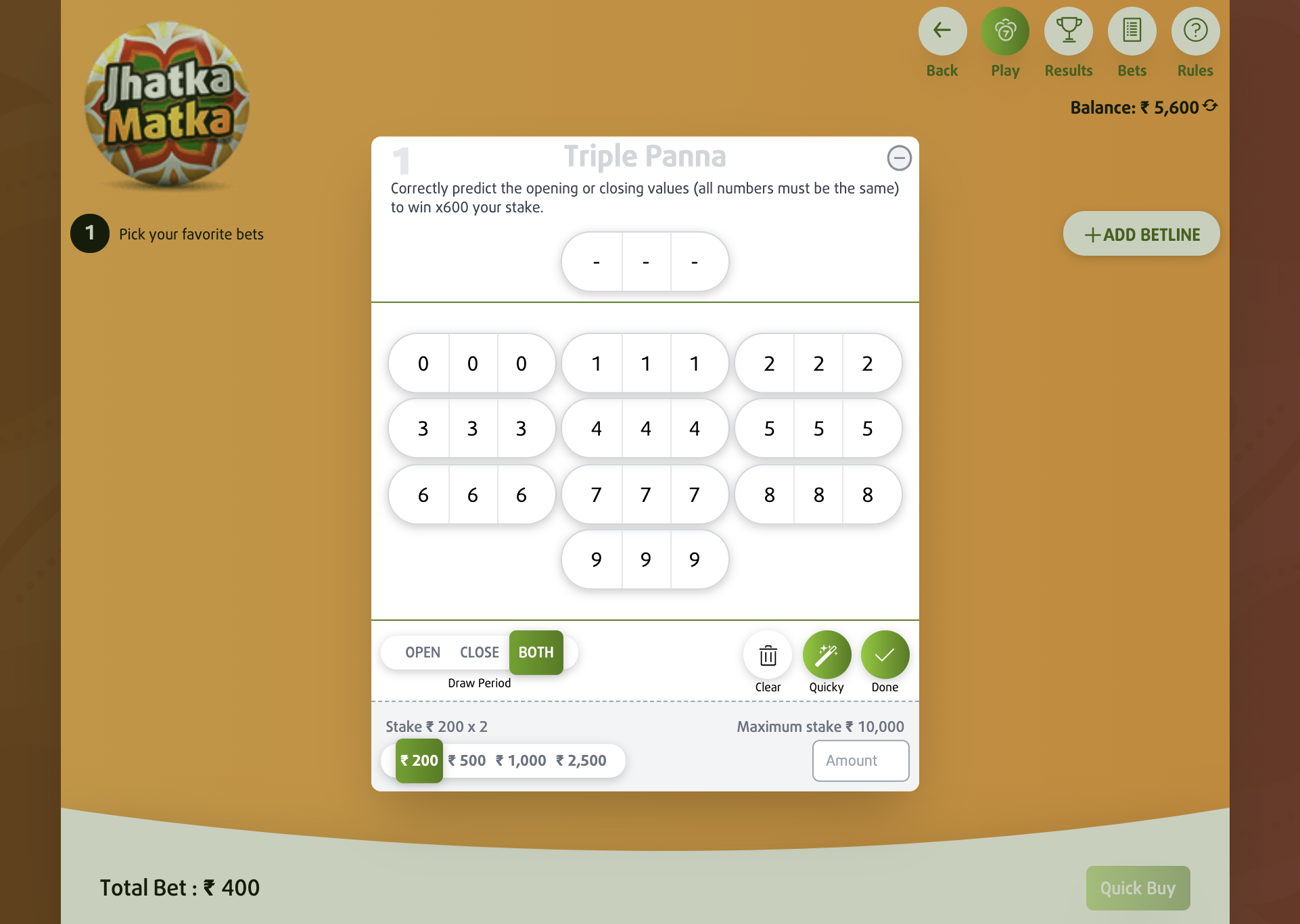 Half Sangam is your lucky guess which you need to place either on Open Ank or Close Ank. 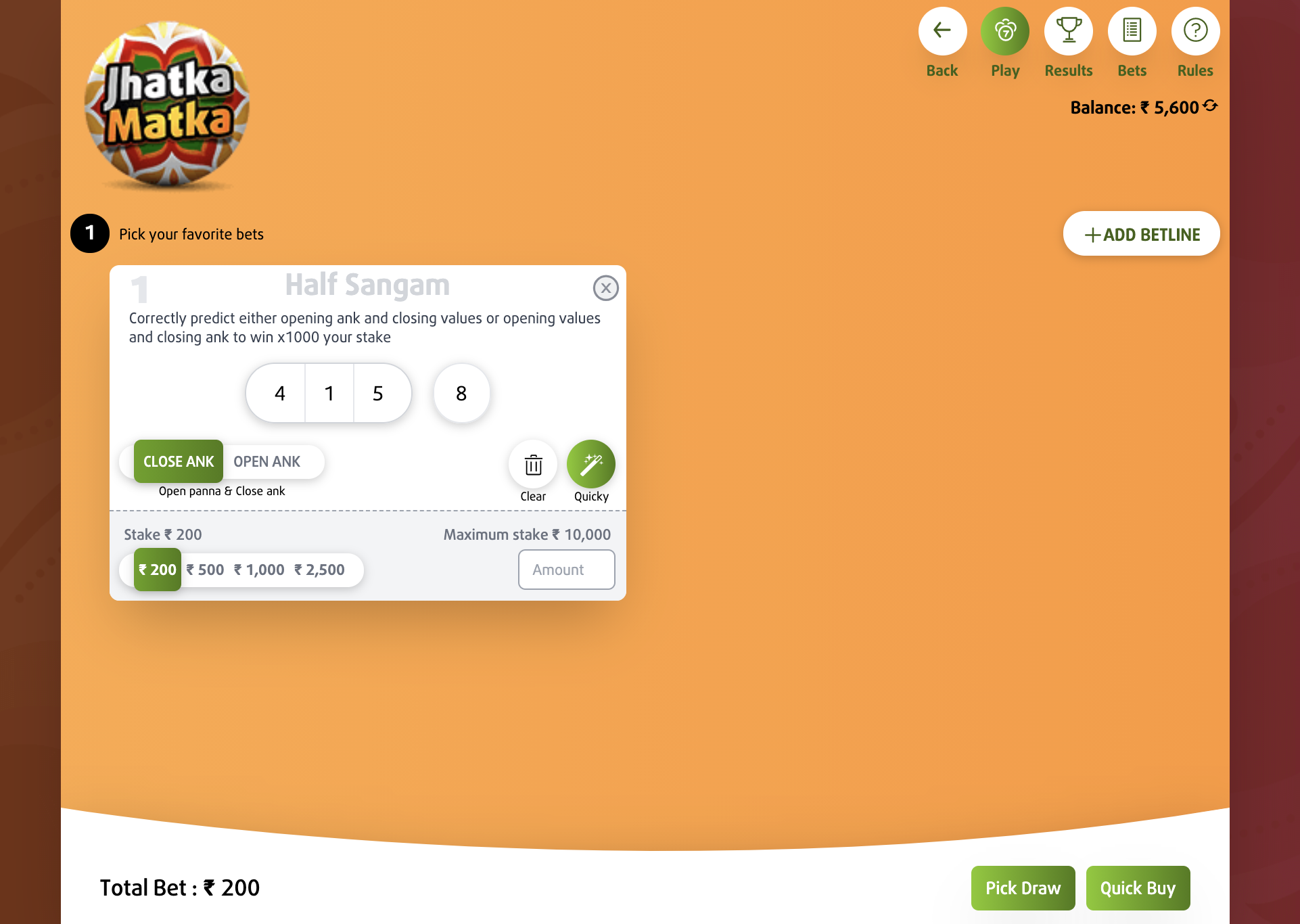 The final bet on Lottoland matka is the high value Full Sangam bet. In this bet, you need to match all the numbers in order (Open and Close) to win a 12,000 times return on the original bet.

To place this bet, you need to manually enter the numbers in the box. 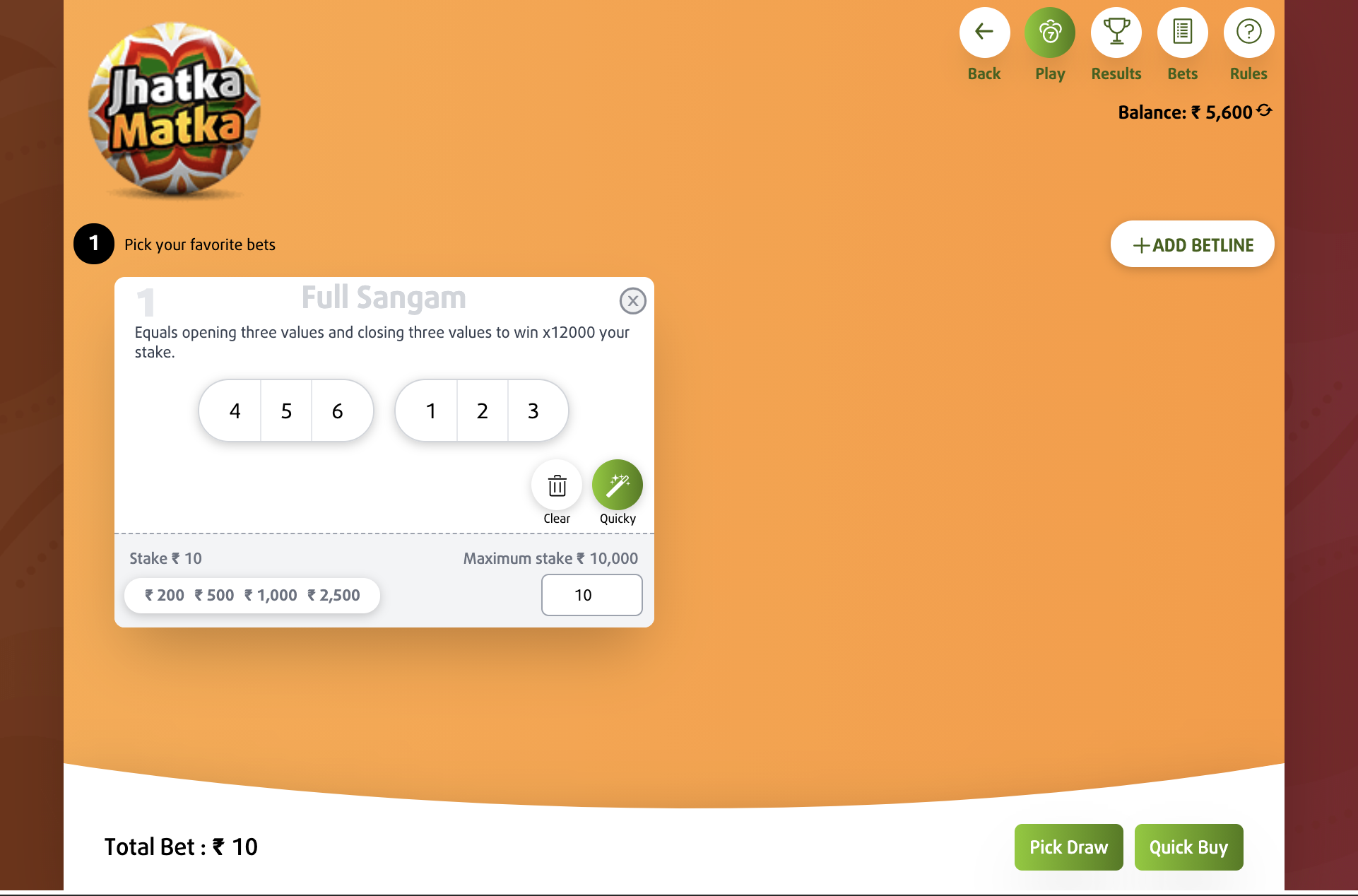 Good luck on this bet!

All the placed bets are placed in your “My Bets” section where you can check whether your number has won.

The interface also gives you an ease of understanding on where you have placed the bet.

Basics of Satta Matka in India

For making it big in the online Satta Matka world, you must be thorough with the Satta lingo! Let’s take a look at basic Satta terminology.

Depending on where you play and which variation of the game you choose, payout rates may vary between 9/1 and 999/1. Obviously, a rate of 999/1 is massive and would result in huge returns.

Whilst it remains a game of luck and chance, the payout, if successful, are so attractive that punters will return to play over and over again. It doesn’t take a huge bet either in order to hit a jackpot win.

In any case, the odds tend to be against the player, which is always the case in a lottery. The possible combination of numbers that could be drawn is so massive as to be incomprehensible.

Also, expect to pay a fee on every Rupee won. The Matka betting agent will want to make a living as well and usually takes a cut of 5% on your winnings.

This is where we need to get real. You’ll be searching the Internet far and wide for reliable tips and tricks on how to win at Satta Matka or any of its versions. And many promises and assurances will be made to you.

Generally, the ratio of win to loss is given at 10% winning versus 90% losing. That means your chance of winnings stands at 10%, which is not an awful lot.

Remember also that this is a game of pure chance. And such things cannot truly be predicted, no matter which table you choose to look at and implement or which strategy you choose to play.

As with any lottery, if luck is not on your side you will lose. And luck doesn’t really favour anyone.

So, how can we help you here? Well, we’re here to tell you that you should enjoy the game above any aim to make a gain. Winning will never be a certainty. We can’t predict the numbers that will next be drawn. Nobody can and anybody who claims that they have a fool proof strategy is trying to fool you. Don’t fall for it.

Instead play mindful and with joy. Any form of gambling should only ever be viewed as fun on the side. Keep your bets small in order to stick with your budget. Play the numbers you like and never ever chase your losses.

If you win, great! Enjoy it. Don’t count on a lucky streak. A losing streak is much more likely. Take your winnings, treat yourself and come back another time to play once again.

Finally, do learn all the rules of the version you’re playing. Knowing a game does increase your odds, even if only ever so lightly. Still, betting randomly is unlikely to do you any favours. It’s best to go in prepared.

A beloved game of the Indian masses, Satta Matka aka Matka King aka Satta King finds its origins in the late 1950s.

Once upon a time Satta Matka was a form of lottery where punters placed bets on the opening and closing numbers of the rates of cotton that were transmitted to the Bombay Cotton Exchange from the New York Cotton Exchange.

This form of gambling dates back to before the independence of India and was then known as Ankada Jugar (‘figures gambling’). However, in 1961 the New York Cotton Exchange put a stop to this game, and punters were forced to look for alternatives. It was Rattan Khatri, one of the first so-called Matka Kings, who introduced the idea to bet on the opening and closing rates of imaginary products. After all, nobody could possibly put a stop to something imaginary, right? And the game was not so much about the cotton rates but about the fun of placing bets on random numbers.

In this new version, where no official numbers could be transferred via transmitter, random numbers were written on pieces of paper, which were placed into a pot (called matka) and then drawn by one person, who would read the winning numbers out loud.

Eventually the game changed and instead of numbers from a pot, numbers were drawn from a deck of cards. What stayed was the name: matka.

With time, the game evolved and became extremely popular during the 80s and 90s. Today, technological advancements and the availability of free internet has given rise to an online Satta community. Several online gaming platforms offer innovative and engaging gameplay that captures the true essence and thrill of an exciting Satta game. Do you want to try your luck at Satta Matka and win big?

Cracking down on the business

Satta Matka was never exactly legal. It was a practice among many mill workers in Mumbai, which resulted in Mumbai becoming the biggest hub for the Matka business. In the 1980s and 90s the business reached its peak there and betting volumes regularly reached Rs. 500 crore every month.

Eventually the Mumbai Police cracked down on the Matka dens, forcing the dealers out of the city. It’s not exactly clear on why the police seemingly suddenly decided on the crackdown, however.

Dealers decided to move to other states instead, including Gujarat and Rajasthan, though the business did not truly recover after that. Punters who were left hanging by the move eventually pursued Satta Matka online or decided to play other lottery games instead.

You can read more about the history and other Matka kings on Wikipedia.